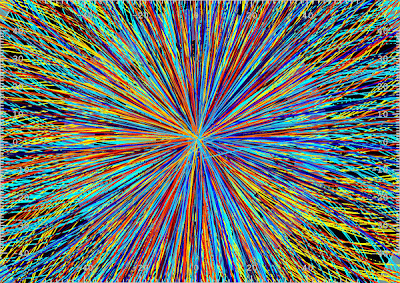 A lead-ion collision in the Large Hadron Collider.
The Large Hadron Collider ~ the world’s foremost portal to a new view of physics ~ is revealing bits of matter that don't mirror the behavior of their antimatter counterparts. The discovery could rewrite the known laws of particle physics and help explain why our universe is made mostly of matter instead of antimatter.
The 17-mile circular particle accelerator near Geneva has been colliding protons at high speeds to create explosions of energy, producing subatomic particles. Now researchers are reporting that some matter particles produced inside the machine appear to be behaving differently from their antimatter counterparts, which might provide a partial explanation to the mystery of antimatter.
According to LiveScience.com, scientists think the universe started off with roughly equal amounts of matter and antimatter. Over the ensuing 14 billion years, most of the antimatter was destroyed, leaving a universe of mainly matter.
"It's certainly exciting, and certainly worth pursuing," LHCb researcher Matthew Charles of Oxford University told LiveScience. "At this point it's a tantalizing hint. It's evidence of something interesting going on, but we're keeping the champagne on ice, let's say."
Click here for the complete article.
Posted by Gregory LeFever at 2:00 PM 4 comments: