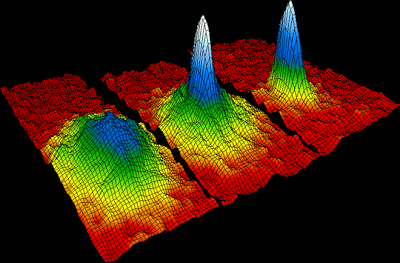 
Physicists have developed a mathematical theory describing how the collective quantum mechanical weirdness of peculiar materials such as magnets, superfluids and neutron star matter.

“It’s like shooting many, many birds with one stone,” says particle physicist Hitoshi Murayama of UC Berkeley, co-author of a paper on the work. He showed that the behavior of these materials hinges on a phenomenon known as spontaneous symmetry breaking.

According to Wired magazine:

Symmetry breaking happens when a group of particles that once had no preferred alignment or direction suddenly does, creating a collective behavior.

One of the best-known occurrences of symmetry breaking happens when certain metals ~ such as iron ~ cool down and form a magnet. Each atom in the metal contains an electron that forms a microscopic magnetic field. When the metal is hot, the atoms have their individual magnets pointing willy-nilly in random directions.

But as they cool down, the atoms start to point their magnets in the same direction as their neighbors. If enough of the atomic magnetic fields align, their collective action will be strong enough to attract and repel other magnetic materials.

“It is a neat tie-up of things that we know about individually,” said condensed-matter physicist Anthony Leggett of the University of Illinois, who was not involved in the work. “With this theory, it may be possible to predict or classify new materials.”

New studies on the flow of granular materials will have benefits in helping better understand why liquids freeze and how avalanches fall, among many other phenomena.

Posted by Gregory LeFever at 12:38 PM No comments:

What Would Finding 'God Particle' Mean?

Here renowned theoretical physicist Michio Kaku discusses the Higgs-Boson ~ also referred to as the "God particle" ~ and what its discovery would mean for physics.
Posted by Gregory LeFever at 9:02 AM No comments: 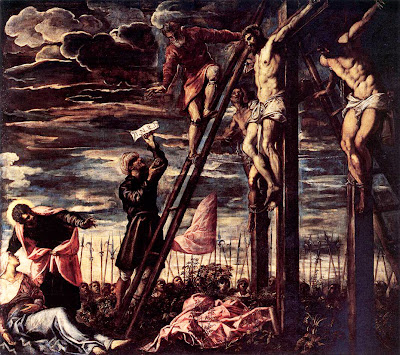 "Crucifixion of Christ" by Tintoretto, 1568.


Earthquake data ~ along with New Testament descriptions ~ points to Friday, April 3, in the year 33 AD as the day Jesus of Nazareth was crucified.
The Gospel of Matthew, Chapter 27, mentions that an earthquake coincided with the crucifixion:

“And when Jesus had cried out again in a loud voice, he gave up his spirit. At that moment the curtain of the temple was torn in two from top to bottom. The earth shook, the rocks split and the tombs broke open.”

The latest investigation, reported in the journal International Geology Review, focused on earthquake activity at the Dead Sea, located 13 miles from Jerusalem. Geologist Jefferson Williams of Supersonic Geophysical and colleagues Markus Schwab and Achim Brauer of the German Research Center for Geosciences studied three cores from the beach of the Ein Gedi Spa, adjacent to the Dead Sea.
According to Discovery News:

Varves, which are annual layers of deposition in the sediments, reveal that at least two major earthquakes affected the core: a widespread earthquake in 31 B.C. and an early first century seismic event that happened sometime between 26 A.D. and 36 A.D.

The latter period occurred during “the years when Pontius Pilate was procurator of Judea and when the earthquake of the Gospel of Matthew is historically constrained,” Williams said.

"The day and date of the crucifixion (Good Friday) are known with a fair degree of precision," he said. But the year has been in question.