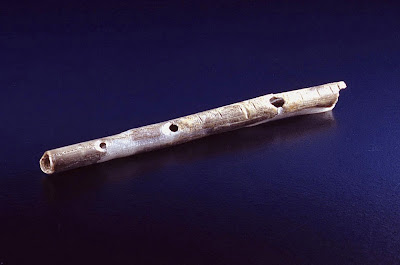 
Discovery of bone flutes dating back some 40,000 years is leading researchers to conclude that human creativity evolved earlier than originally thought.
Researchers were studying a modern human settlement called Geißenklösterle in southern Germany when they came across the flutes, one made from ivory of a mammoth, the other from the bones of a bird.
According to LiveScience.com:

"These results are consistent with a hypothesis we made several years ago that the Danube River was a key corridor for the movement of humans and technological innovations into central Europe between 40,000 and 45,000 years ago," study researcher Nick Conard, of Tübingen University, said in a statement.

The researchers radiocarbon-dated bones found in the same layer of the archaeological dig as the flutes. This carbon dating uses the level of radioactive carbon, which is naturally occurring in the world and decays predictably into nonradioactive carbon, to estimate the age of organic materials.

They found the objects were between 42,000 and 43,000 years old, belonging to the Aurignacian culture dating from the upper Paleolithic period. So far, these dates are the earliest for the Aurignacian and predate equivalent sites from Italy, France, England and other regions.

Results indicate that humans entered the Upper Danube region before an extremely cold climatic phase around 39,000 to 40,000 years ago, researchers said.
Click here for the article.
Posted by Gregory LeFever at 1:00 PM No comments: 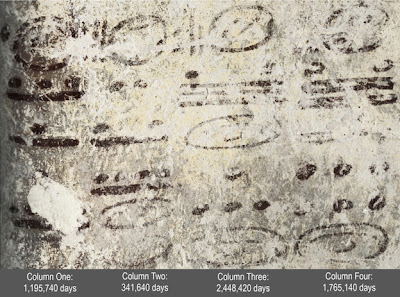 Mayan numbers on the wall stretch 7,000 years into the future.
The recent discovery of an underground Mayan workshop in the dense Guatemalan jungle is important for two reasons: one, the murals and other wall painting are all surprisingly well preserved; and two, calendar fragments show that the Mayan calendar does not end this year.
According to NPR:

Writing in the journal Science, the scientists say the murals confirm what Mayan archaeologists have been saying for years: The Mayan calendar does not predict the end of time in 2012, as some New Age prophets have argued. In fact, the murals register future time stretching far beyond 2012.

Archaeologist William Saturno from Boston University compares Mayan calendars to a car's odometer. "If we're driving a car," Satruno says, "we don't anticipate that at 100,000 miles the car will vanish from beneath us. We know that it will reset to zero, and the next 10th of a mile we go we'll have another number to look at."

What these Mayan timekeepers were doing was simply marking the passage of time from past to future, but in discrete intervals.

The buried room apparently was a workshop used by scribes or astronomers working for a Mayan king. The paintings depict the king and members of his court. The numbers mark important periods in the Mayan calendar.
Click here for the article. 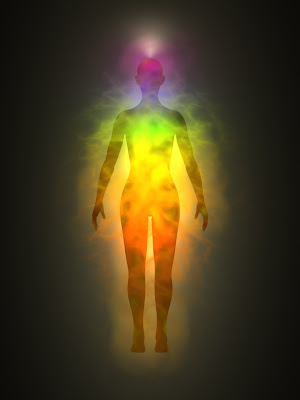 For the first time, a scientific explanation has been presented of the human aura, an energy field of luminous radiation surrounding a person as a halo ~ imperceptible to most people.

Now, researchers in Spain have found that many of the individuals claiming to see the aura of other people actually experience the neuropsychological phenomenon known as “synesthesia.” In synesthetes, the brain regions responsible for the processing of each type of sensory stimuli are intensely interconnected ~ synesthetes can see or taste a sound, feel a taste, or associate people with a particular color.

According to Medical Press:

In neurological terms, synesthesia is due to cross-wiring in the brain of some people (synesthetes); in other words, synesthetes present more synaptic connections than "normal" people.

"These extra connections cause them to automatically establish associations between brain areas that are not normally interconnected,” professor Gómez Milán explains. Many healers claiming to see the aura of people might have this condition.

The University of Granada researchers remark that "not all healers are synesthetes, but there is a higher prevalence of this phenomenon among them. The same occurs among painters and artists, for example.”

The study was conducted by the University of Granada Department of Experimental Psychology Óscar Iborra, Luis Pastor and Emilio Gómez Milán, and has been published in the prestigious journal Consciousness and Cognition.

Click here for the complete article.
Posted by Gregory LeFever at 8:19 PM 3 comments:

Theoretical physicist Michio Kaku believes Moore’s Law ~ the influential maxim predicting the exponential increase in computing power ~ is finally breaking down. He’s talking about the so-called law stating the number of transistors that can be fit on a computer chip will double every two years, resulting in periodic increases in computing power.

…in about ten years or so, we will see the collapse of Moore’s Law. In fact, already, already we see a slowing down of Moore’s Law. Computer power simply cannot maintain its rapid exponential rise using standard silicon technology. Intel Corporation has admitted this.

Moore’s Law, introduced by Intel co-founder Gordon Moore in 1965 was never a law in any scientific sense. As others have pointed out, given Intel’s dominance in the chip industry for much of the period in which Moore’s Law has applied (or appeared to), there’s a self-fulfilling prophecy angle in which the dominant industry player sets the pace for its own benefit.