About 10 years ago, psychologists in Pennsylvania discovered an amazing illusion. They found that they could convince people that a rubber hand was their own by putting it on a table in front of them while stroking it in the same way as their real hand.

The now-famous "rubber hand illusion" was not only a mind-blowing party trick, it was also hugely important in understanding how sight, touch and "proprioception" - the sense of body position - combine to create a convincing feeling of body ownership, one of the foundations of self-consciousness.

He is one of many researchers who have taken the illusion and run with it, creating a whole new set of "bodily illusions" that mess with our sense of self in strange and disturbing ways. "We're doing all kinds of crazy stuff," he says. 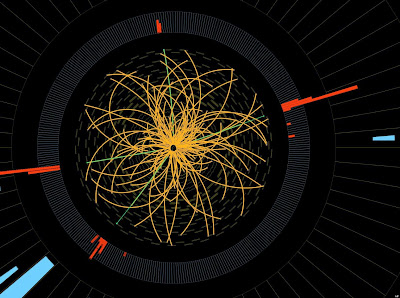 Now confirming the discovery of the Higgs boson particle, physicists are wrestling with implications of actually finding it ~ the last undiscovered piece of the puzzle predicted by the so-called Standard Model, the reigning theory of particle physics.

LiveScience is listing what it sees as the six largest consequences of the discovery, listed here in abbreviated form:

1. The origin of mass
"The Higgs mechanism is the thing that allows us to understand how the particles acquire mass," said Joao Guimaraes da Costa, a physicist at Harvard. "If there was no such mechanism, then everything would be massless."

2. The Standard Model
The reigning theory of particle physics describes the universe's very small constituents. Every particle predicted by the Standard Model had been discovered ~ except one: the Higgs boson. "It's the missing piece in the Standard Model," Jonas Strandberg, a researcher at CERN said last year of the particle announcement. "So it would definitely be a confirmation that the theories we have now are right."

3. The electroweak force
The confirmation of the Higgs also helps to explain how two of the fundamental forces of the universe ~ the electromagnetic force that governs interactions between charged particles, and the weak force that's responsible for radioactive decay ~ can be unified.

4. Supersymmetry
This idea posits that every known particle has a "superpartner" particle with slightly different characteristics. Supersymmetry is attractive because it could help unify some of the other forces of nature, and even offers a candidate for the particle that makes up dark matter.

5. Validation of LHC
The newly announced finding offers major validation for the Large Hadron Collider and for the scientists who've worked on the search for many years. 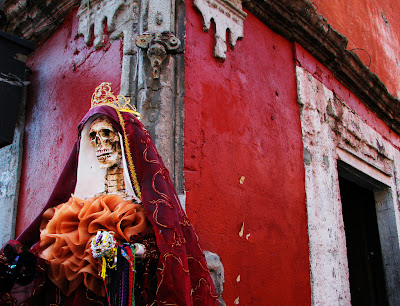 Long popular in Mexico, the skeleton saint La Santa Muerte is gaining a robust following north of the border among many non-Latinos, many of them shunning organized religion.

Wearing a black nun's robe and holding a scythe in one hand, Santa Muerte appeals to people seeking all manner of otherworldly help: from fending off wrongdoing and carrying out vengeance to stopping lovers from cheating and landing better jobs.

According to the Associated Press:

"Her growth in the United States has been extraordinary," said Andrew Chesnut, author of Devoted to Death: Santa Muerte, the Skeleton Saint and the Bishop Walter F. Sullivan Chair in Catholic Studies at Virginia Commonwealth University. "Because you can ask her for anything, she has mass appeal and is now gaining a diverse group of followers throughout the country. She's the ultimate multi-tasker."

The saint is especially popular among Mexican-American Catholics, rivaling that of St. Jude and La Virgen de Guadalupe as a favorite for miracle requests, even as the Catholic Church in Mexico denounces Santa Muerte as satanic, experts say.

The origins of La Santa Muerte are unclear. Some followers say she is an incarnation of an Aztec goddess of death who ruled the underworld. Some scholars say she originated in medieval Spain through the image of La Parca, a female Grim Reaper, who was used by friars for the later evangelization of indigenous populations in the Americas.

For decades, though, La Santa Muerte remained an underground figure in isolated regions of Mexico and served largely as an unofficial Catholic saint that women called upon to help with cheating spouses.

Click here for the article and more photos.
Posted by Gregory LeFever at 7:49 PM No comments:

Pace of Human Evolution is Quickening 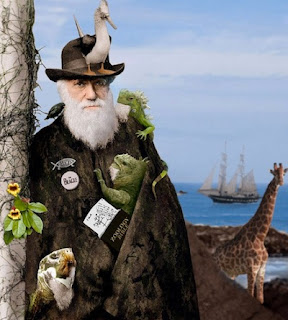 A massive study of human genetic variation has estimated the age of more than one million variants ~ or changes to our DNA code ~ found across human populations and found that the vast majority proved to be quite young.

These chronologies show that recent human history is characterized by both narrow reproductive genetic bottlenecks and sudden, enormous population growth. The evolutionary dynamics of these features have resulted in a flood of new genetic variation, accumulating so fast that natural selection hasn’t caught up yet.

As a species, we are freshly bursting with the raw material of evolution.

“Most of the mutations that we found arose in the last 200 generations or so. There hasn’t been much time for random change or deterministic change through natural selection,” said geneticist Joshua Akey of the University of Washington, study co-author. “We have a repository of all this new variation for humanity to use as a substrate. In a way, we’re more evolvable now than at any time in our history.”

Akey specializes in what’s known as rare variation, or changes in DNA that are found in perhaps one in 100 people, or even fewer. For practical reasons, rare variants have only been studied in earnest for the last several years. Before then, it was simply too expensive.

A conclusion of the new findings is that the genetic potential of our population is vastly different than what it was 10,000 years ago.