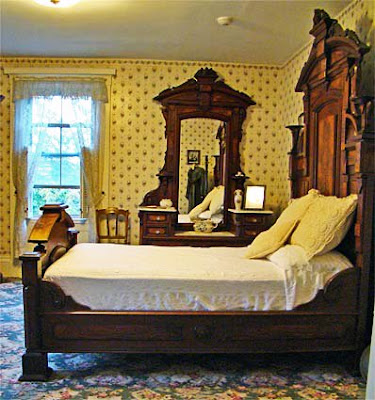 Here's the bedroom where Lizzie's mother was murdered.
Today’s Los Angeles Times has an article about ghostly occurances at the bed & breakfast in Fall River, Massachusetts, where the infamous Lizzie Borden allegedly killed her parents with an ax in 1892.

The building is a rambling, eight-bedroom manse. Built in 1845, it was one of the finest homes in Fall River, a then-thriving community known for its textile mills. At the murder scene, Lizzy’s father, Andrew Borden, a wealthy banker, was struck 10 times. His wife, Sarah, suffered 18 blows.

Investigating police thought a broken hatchet found in the basement was the murder weapon. Although Lizzie (in photo below), who was 32 at the time, is by legend the murderer, a jury found her innocent. 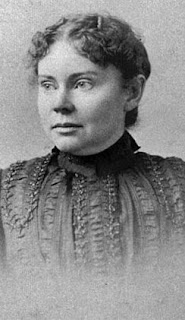 The LA Times article follows a stay in the B&B by Karen Zorn of Maryland and her boyfriend. Zorn won for $405 on eBay a night’s stay in the bedroom where Lizzie’s mother was hacked up. The couple checked into the room on August 4, the 116th anniversary of the murders.

"We went up to the room and it was freezing cold. It was the coldest room in the house by far. And that kind of spooked us out," Zorn told the LA Times. "As the night wore on, other weird things started happening. At one point, my boyfriend went into the room and he claimed there was a lamp in there rocking back and forth that had turned itself on."

But that wasn’t the end of it.

"We were sitting in bed talking about the creepy things that had happened,” Zorn continued. “And I said, 'What do you say if anything else really freaky happens we just get up and leave?' And he said, 'OK.' And just as we said that, the bedroom door swung open. We began to scream. Everybody in the house could hear us."

The couple left immediately for the nearby Best Western.

What a beautiful room, and I love the Renaissance Revival furniture, or is that Eastlake?

I suspect the spooks would be the parents, because maybe they were horrible in life and drove her to it, and therefore, they remain there. Ooooh sceddy, as Count Floyd would say.

I just love this story, it started my life for Halloween and all things spooky I think. Now I cant go a Halloween without taking a trip to the scariest haunted attraction in DE and getting a full spooky experience. I really would love to visit the Lizzie Borden house one of these days too